Writing and music and radioactive snow

I once read that Peter Carey needs complete uninterrupted silence for eight hours a day to write. My first thought was: what luxury, the second was that he needs to harden up. (Actually, he probably has enough cash that he doesn’t.) I must clarify that this was a while ago and maybe it wasn’t Peter Carey, maybe it was Tim Winton. (But I am more inclined to believe it of Carey than Winton, because I am a Winton fan.) Either way, if this was the case for most writers, especially those with children, it’s difficult to imagine that any books would get written at all.

My writing windows at the moment are one and a half hours max, twice a day if I’m lucky, three days a week. (Those three days are preschool days, and an hour and a half is the longest my baby will nap for.) This means I don’t have the luxury of staring into space picking lint off my sleeves for two hours before I get down to the business of writing actually words. (That’s what I used to do, before children. Interestingly, I wrote hardly anything, but had noticably lint-free jumper)

So what does one do, when time for accessing that very definite headspace needed to write fiction is so limited? My trick, as I wrote last post, is to listen to particular songs over and over while I write. The brain’s uncanny powers of memory and association kick in, and I can slip into the world I need to. Most of the time. Because the setting for The Sky So Heavy was so important to the story, this technique was crucial. It may surprise you, but i don’t in fact live in a icy tundra where radioactive snow falls from the sky. For some reason Radiohead’s Codex was my track of choice for conjuring such an environment in my head 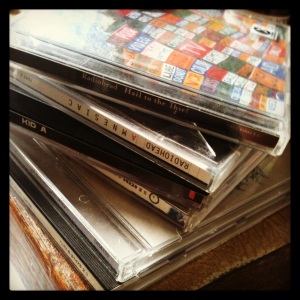 . When I hear the opening piano chords I automatically see a darkened highway, smothered in grey snow, illuminated by a single set of headlights. In my gut I can feel the twist of fear my protagonist feels as he steers the car through the alien landscape. His mouth dries as he passes the twisted carcasses of cars that have tried to make the same journey that he is attempting.

I’ve also found that music can be really useful in helping me nut out other aspects of my stories, characters in particular. Six years ago I started work on the story which will hopefully be my second novel. Unlike TSSH the protagonist is a teenage girl. Hannah is jaded in a way that only a fifteen year-old can be, although she is hurting in a way which far exceeds the experience of most people. She is also a smart arse. Hannah is trying to deal with a recent family tragedy, certainly unlike anything I have ever faced and I had difficulty tapping into the emotions that she was experiencing beyond the obvious cliches of grief and guilt.

I have completely redrafted the manuscript twice (which is fortunate because its earliest incarnations were pretty woeful) and it wasn’t until after leaving it in a drawer for two years, and then revisiting it briefly every three months or so for two years after that, that I was able to get to the core of the character. It was a song that got me there, Beach House’s Walk in the Park. I wasn’t even working on the story at the time, I was on the train listening to Beach House. But the lyrics, simple as they were, crystallised the character for me.

So now, as The Sky So Heavy is back with the editors and I wait, I will pull Hannah’s story out again for perhaps the hundredth read-through. I will listen to that song. And I will see if she has anything else to tell me.